From Discordia
Jump to: navigation, search
Admins apply these rules at their own discretion, and they may ignore the enforcement of specific rules if it is considered necessary.

Community rules apply in Discord, OOS channels, repositories and all sites under our control. IC relations are not governed by these rules, but there is one caveat. Blocking on community platforms can be carried over to the game, and vice versa.

Each rule has refinements and details available when opening the spoiler.

This is a game, and we all came here to enjoy it. Prolonged conflict and toxic behavior are not permitted. Try to be adequate or at least seem so.

Please communicate in a way that doesn't make community members endlessly cringe, and so that we don't get banned from our platforms.

For each topic on our platforms a corresponding section or channel has been created. While offtopic is not punished in most channels (although you should listen when admins tells you to take this topic somewhere else), development channels, Github pull requests and other channels have more severe restrictions.

These rules apply only in the game itself and enforced only by the administration of the game server.

Intentional murder\isolation\grievous harm without reason. You must have a good reason to kill another player. This may be: self-defense, a long-running conflict, the execution of an order (the person who ordered it will be responsible for the murder) or the execution of a sentence.

2. Violation of the atmosphere and rules of communication

Your speech should correspond to the role played, and not your usual chat behavior. Ideally, it should match the way the characters in films and books speak. Internet slang, emoticons and text abbreviations are prohibited, your characters speak in a voice.

3. IC in OOC and metagaming

Our server is an RP server, and despite the presence of some concessions in comparison with other servers, the minimum requirements for metagaming are still present.

The engine should be started in an acceptable time frame, people should not die in the medical lobby, while doctors drink tea, and the like. Remember that the life of the entire ship depends on the work of key jobs. Heads and AIs should not exit the game after the start of the round.

This greatly complicates the work of the administration and is punished quite seriously. If you want to switch to another account, coordinate this with the server administration.

These can serve as the basis for complaints, or for internal proceedings.

The administration should not only comply with its own rules, but also be an example to follow.

1. Be an adequate adult

This is perhaps the most important. You should never forget that this is just a game, people come here to have fun, and you want to help them in this.

2. Do not harm your own server

Do not shit inside where you live. This would seem quite obvious, but it is sometimes easy to forget in a fit of anger.

3. We are a server with the minimum possible admin intervention

This is one of the basics of the server. We understand that the rules are necessary to maintain an adequate community life, however we do not directly intervene in the events of the round.

Not the rules as such, these are recommendations for directing the administration in the right direction. 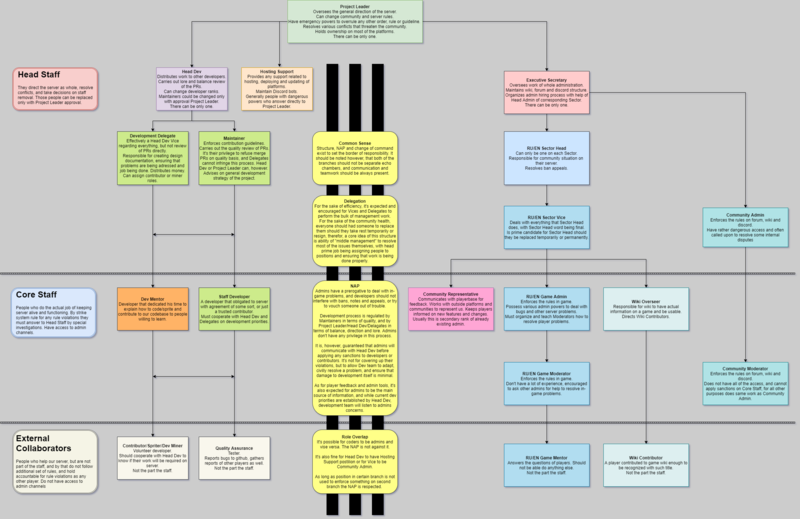