The supermatter is the core of power generation aboard the Eris. Don't touch, or even look at it unprotected. 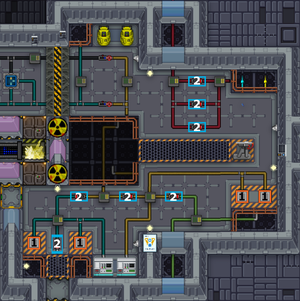 1. Wrench the canisters in the ports marked with Orange (1) squares. For this guide, use plasma canisters as the vastly higher specific heat (10x that of nitrogen) makes it ideal for generating lots of power while minimizing risk of delamination.

2. Max out and turn on the pumps marked in Light Blue (2) so that the gas flows freely through the loops.

3. Set up omni-filters, shown in Dark Blue(3) squares. These filters will filter gases OUT of the coolant loop and into waste canisters. Make sure plasma filter is off - we do not need to filter it out unless you want to delaminate the engine (albeit very slowly). These filters should be in the correct configuration on round start.

4. Wrench the two waste canisters onto the Yellow (4) squares and turn the Green (4) pump to max.

5. Wrench a Nitrogen canister to the port in the Red (5) square and turn the Green (5) pump to max.

6. Head to the computers on the main level and look at the middle one (Marked with pink (5) square). Search for the inject port. 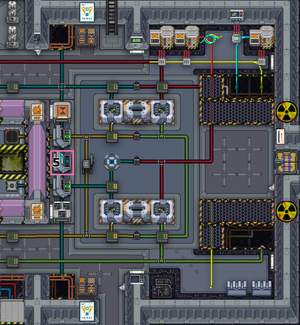 7. Once the canisters in the Orange squares are empty, replace with four more canisters of the same gas.

8. Be sure to use the RCON console (found in the room with the computer in the pink square) to turn on substations that are off back on and allocate more or less power to substations that need it. Most substations can run optimally with 200 input power without having power failures. (Optional) Double check everything.

9. Turn on the emitter using the switch upstairs. Located south of the RCON console.

A TEG at work.

The core power generation is done by the Thermo-Electric Generators (TEGs). There are four in the engine, and they are powered by the flow of two gasses of differing temperature through their two sides. The larger the temperature difference, the more power generated. Note that they are less efficient when generating more than 500kW, but are not harmed by doing so, despite the intermittent sparks generated.

There are two gas loops in the engine, the cold loop and the hot loop. By mixing in the generator, the temperature of the gasses are equalized somewhat, so the hotter gas should be reheated, and the cooler gas should be cooled. This is where the supermatter comes in. The cold loop flows from red pipe, to generators, to the green pipe, then out to radiators in space to cool back down. The hot loop flows from yellow pipe, to blue pipe, then into the supermatter chamber to be reheated. The supermatter, when excited, produces a large amount of heat, and will probably burn some of the plasma in the hot loop. In order to remove the products of this combustion, everything except plasma is filtered from the hot loop. Oxygen in the hot loop is a very bad idea - it leads to fires, which can rapidly raise the core temperature to dangerous levels.

The plasma setup can withstand EER up to 1500+. You can simply just leave emitter on since it's bottlenecks at ~1400. Setups with other gases aren't as safe - you'll want to do a few shots, maybe 6-12 depending on the gas.

TEG power output depends on the difference between the temperature of the loops, and the heat capacity of the gas mix in the loops. While the hot loop doesn't get particularly hot with a pure plasma setup, it still generates vastly more power due to the high heat capacity, meaning it's bother safer and outputs more energy.

It's also a good idea to upgrade the two SMES units (the ones side by side in the computer picture) using the parts in one of the crates south of them. Otherwise tinkering with shield input power could prevent needed substations from getting proper power applied. To upgrade them, follow the small guide below.

Remember to download the shield modification program to turn on the shields and explore the extra options as well as tinkering with the input cap. Enabling the engineering section bypass allows the SMES units to charge the shields much faster, and is recommended - but it might be best left till later, as it can be a bit of a power hog while it charges to maximum capacity.

Entering the lower floor once the engine has started should be avoided unless absolutely necessary - the supermatter emits an EXTREME amount of radiation, and it's even been seen to penetrate full protection.

It is typically intensely difficult to completely undo a delamination, but it can be substantially delayed by following a few principles.

The CEV "Eris" is a space ship. It may not look like it, but it is. To fly through space it obviously needs thrusters, these thrusters are maintained by the Technomancers aboard. There are two thruster rooms for both sets of thrusters aboard the ship. For the inevitable Captain who may fly the ship without understanding his ship, your job will be to maintain them. 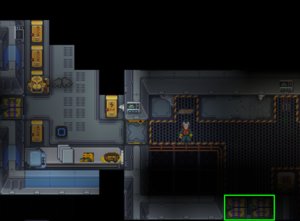 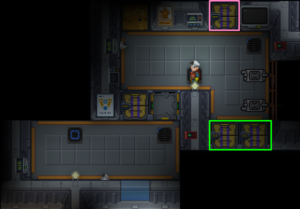 When the time comes of CEV "Eris" drifting through space, you will need to refuel the thrusters immediately, lest you hear the ominous announcements of Meteor's incoming forever. Before getting started, know the color coding for the following images. 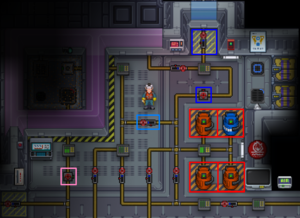 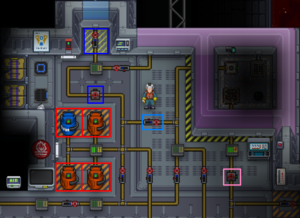 Each Thruster room is the same, just switched depending on which side of the ship you are on. To refuel the ship, you simply need to flood plasma into the borosilicate rooms as seen in the images.

Select your fuel, nominally it is plasma, and wrench the canister to connector port. Then Open the valve (Light Blue) to begin pumping plasma into the mixing chamber.

You have just refueled the ship. However, always remember to keep the Fuel Valve OPEN (Pink) and it will be indicated as so if there is a green or red light.

Things to Note: You can ignite the fuel for more thrust, and even mix O2 into it, essentially the hotter it is, the more thrust you will obtain. However it is quite unsafe as doing so without knowing how fire works can lead to a plasma leak or worse, the detonation of the Thrusters.

Whenever you have expended the plasma canisters located in the Thrusters room, you may need to refuel them. To refuel the canisters wrench an empty canister to the Connector Port (Yellow Square). Afterwards, open the valve (Light Red). Then just wait for the canister to be refuelled.

Remember to connect the canister before filling!

Note: Do not open the canister if it is not wrenched to a connector port unless you want to release plasma into the air